Is Anyone Fixated on this Coronavirus?

I am on the computer reading about this non-stop.
I am terrified whenever I hear people coughing around me.
Is anyone feeling the same way? How are you handling it?

Doesn't bother me, personally. I ignore the hype. I don't live in China, don't know anyone who knows anyone who may travel to China for any reason.

Do you remember when the Swine Flu was such a big thing? I caught it when I was in college! Swine Flu type B. I was put on antibiotics and had to leave campus for the week. All it felt like was a cold with a bad cough. I recovered in like 2 days and was fine!

Rathgar said:
I am on the computer reading about this non-stop.
I am terrified whenever I hear people coughing around me.
Is anyone feeling the same way? How are you handling it?
Click to expand...

Honestly I haven't even listened to or read anything on it yet. I have been off google and news for almost 2 months now.
R

maybe its just the media blowing it out of proportion but they are doing a good job of scaring me.
S

There's huge hype about it for sure, but it doesn't sound any more dangerous than some other virus. Some people who've had it had only mild symptoms like a cold and were over it in a few days. Like most viruses, its hardest effects are on the elderly and those with compromised immune systems. It's the fact that the news is covering it constantly that makes it seem worse than it is.
T 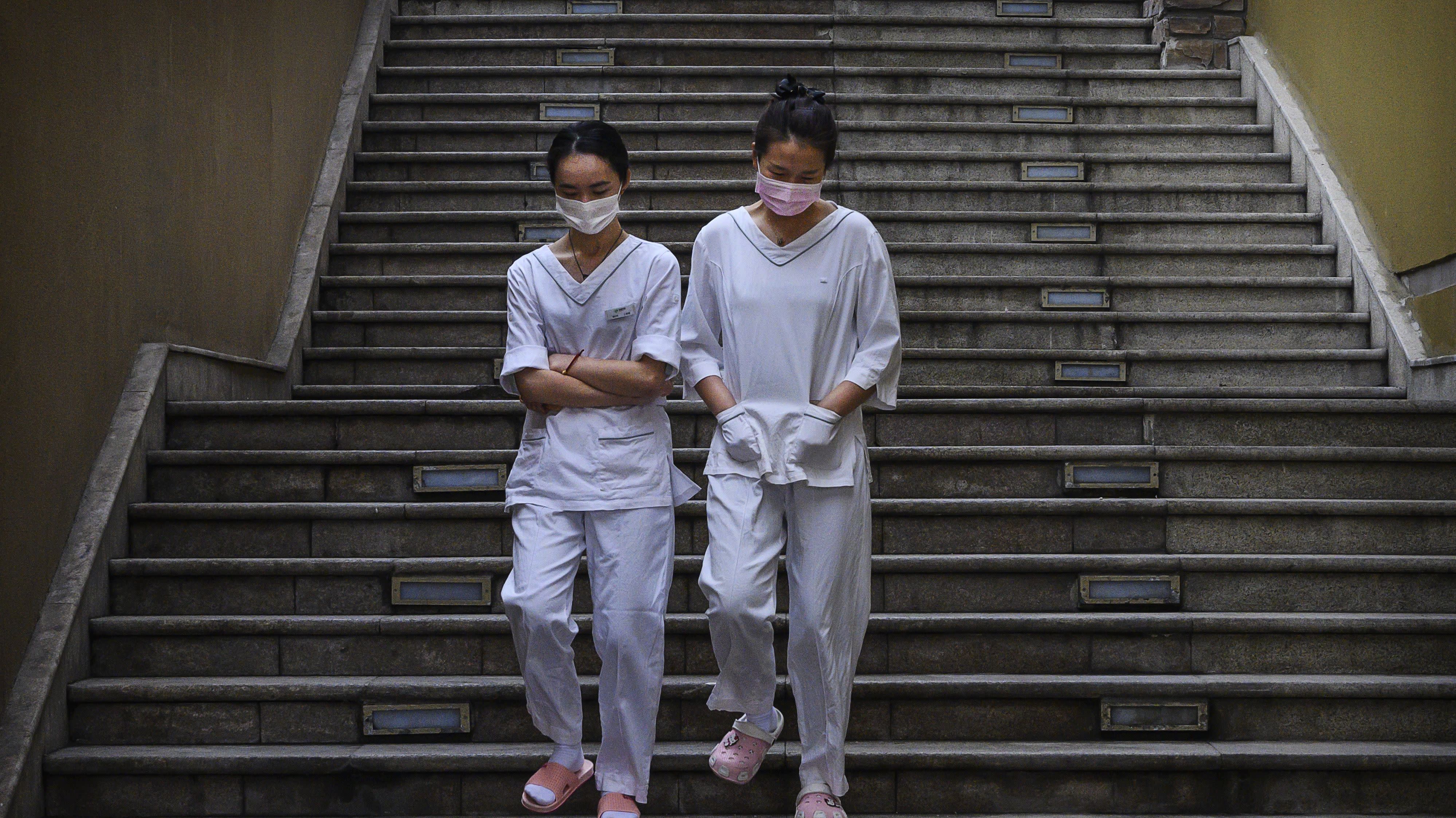 An American biotech company says it created a coronavirus vaccine three hours after getting access to the virus' genetic sequence on Jan. 9, and now scientists are racing to get the vaccine on the market in record time.

Stuff like this is the kind of thing where I actually am capable of being fairly rational. I am 29 and in good shape and am fairly confident I could fight off a virus like that if I ever came down with one. Things like cancer, nerve disorders, and stuff like that are what freak me out honestly.

It will remain big news until a bigger news story comes along. Not much else happening in the world at the minute.
D

Even if you catch this, it's very, very likely you'll recover from it. The majority of cases outside of China are very mild and they're being caught only because we're looking for them. These cases indicate there is likely a substantial amount of the population in China that only have mild illness but aren't being tested. At the beginning of any epidemic, the severity will always be overestimated because at risk populations are the hardest hit and get the most attention while mild cases will almost always fly under the radar.

Did you know at the start of the 2009 swine flu pandemic that early estimates of the fatality rate ranged from 3% to 18%? That's because they only used a small sample size of the most severe patients - the same thing was done for this virus. In the end, it was found that the flu that started that pandemic was no more deadly than the average flu. There are A LOT of similiarities in how this coronavirus is playing out in comparison with the 2009 flu pandemic.

I'm not trying to downplay this illness, it's going to be bad in countries with less developed healthcare systems, but if you're in the U.S., Canada, et cetera, you're going to be fine. This virus is not SARS, and it's not MERS. It's becoming more and more believed that this is going to resemble a flu pandemic.

I would suggest stop reading up on this. The media is not responsible enough to write calm and collected articles about this and the average joe on social media is catastrophizing this everywhere. Please live your life and enjoy it - just make sure to wash your hands a lot in public, don't touch your face, eyes, or mouth with unwashed hands, and avoid sick people.

I check on it daily.

A big government like china does not simply shut down and make hospitals in 10 days over something not very serious.

I think the best answer is none of us really know how this will play out, we also don't know how severe this virus is because its
novel.

Reasom China is making hosptals for people who have the virus is because others who had it showed it at regular hospitals and it spread in the hospitals. Lot of the deaths would have been people who were already sick. That is why other countries had to think fast. What to do if anybody showed up at a hospital? Lot of places have a specially isolated area. Well away from other patients. They saw the mistake made in China. Allowing people with the virus into regular hospitals with other patients who hadn't got the virus. That was just stupid. Plus that did account for a lot of the deaths. Which can also happen if a regular flu gets into a hospital. If people are already very sick and a normal flu spreads it is dangerous. So China wanted to put people with the virus away from already sick people who hadn't got the virus.

Let it go.
You have a better chance of dying from Heart disease.
Its the #1. undisputed killer of all people on earth.
If your heart fails you need surgery and or a heart transplant.
Coronavirus is just hyped up by the media
If you're scared congratulations its working.
On average the amount of people that die from mosquitos Per year would eat Coronavirus for breakfast.
Stop watching tv and Facebook.

I'm still confused on why people think its hype?

China is like, lets destroy our economy so news stations will talk about us.
D

Certate said:
I check on it daily.

A big government like china does not simply shut down and make hospitals in 10 days over something not very serious.

I think the best answer is none of us really know how this will play out, we also don't know how severe this virus is because its
novel.
Click to expand...

China is a country ruled by an authoritarian government who need to keep the 1.4 billion humans living there pacified. A disease outbreak, even a mild one, presents a threat to their mandate.

And yes, no one knows how this will play out. Will China contain it? Will it die down enough before the warm weather arrives? Or it will it become endemic to humanity and circulate as one of the several coronaviruses that cause common colds and sometimes severe illness?

We do know how severe it is because we're getting a clearer diagnostic picture of it from the international cases. It causes mild illness in the majority of cases but it can cause severe illness, primarily in the elderly and people with certain health conditions, and rarely severe illness in the young. Although this virus is related to SARS, it's distinct from SARS as well as MERS, it's more infectious than SARS and much less deadlier.

This virus is not all doom and gloom. I'm not downplaying this illness but from what we know and what we're learning, this virus isn't the start of a apocalyptic pandemic.

China is like, lets destroy our economy so news stations will talk about us.
Click to expand...

For me, when I say hype I'm referring to the media's portrayal of the situation as a whole. Sure, the illness is obviously quite serious, but the media always blow things out of proportion. Fear sells.

Anyone remember the Ebola scare in 2014?
Kid you not one of my clients turned his home office into a quarantine area
Looked like a lab.
C

I'm from a major city. I don't think that this outbreak is just nothing to worry about. Still, most people will not get corona virus. From what we're seeing now, most people who get corona virus will not die. China is taking a big hit from this, many workplaces are in fact temporarily closed while this is sorted out more which is a hit to their economy, so clearly, this isn't all just hype. But, more understanding of the virus and prevention will evolve. Don't get consumed by news reports. It will only freak you out and make you feel like the world is ending. It isn't.
R

I agree that the media will elevate stress with their headlines.
However, I also agree that there is some cause for concern. The truth lies somewhere in between -
Every death is reported - as I am writing this I just got an update that head of hospital in Wuhan died of coronavirus..Sigh.
what do you do if you have a cough, runny nose etc? I have that all the time.
Last edited: Monday at 5:32 PM